A lightweight version of Firefox for using RIA on the desktop

Prism, formerly Webrunner, installs Web applications on your desktop, on Windows, Mac, Linux.. This is a small version of Firefox dedicated to Web application as Analytics or others. An interface between the desktop on your operating system and the Web.
Each application is physically represented by a bundle, a file that creates the link between Prism and the remote software.

Update February 4, 2011: The project Prism is now abandoned by Mozilla and replaced by Chromeless.

We can read in the press: "Webrunner, Firefox for a single Web site". In fact the exact opposite is true. It is an interface that avoids to launch Firefox to use a single website! And we have an interface for each site with an icon on the desktop, thus avoiding any further navigation on the site, and it allows to keep the environment of each Web application.

As a streamlined version of Firefox, the Prism container removes many features. However, in addition to immediate access to Web applications, the software adds:

How to use Prism?

Actually everything is in the installation. Once the application is installed, it becomes an icon on the desktop on which one click, as with any application installed on the computer, with the difference that we must be connected to let it running.
It is not complicated to use, rather than installing software on the computer, Prism is installed and a bundle for an application. We then take advantage of all updates without any subsequent installation since that is done on the server. 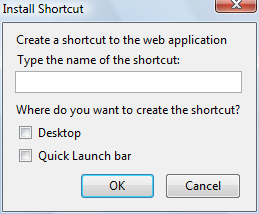 Thereafter, a click on the icon launches the application in a window dedicated to it, without toolbars and buttons as on the browser.Your login and passwords are stored for an immediate access.

The bundle is represented by a .webapp zip file containing an INI file as of any XUL application, and an optional JavaScript file.
To create your own bundle, Mozilla gives instructions.

There are already many applications available, and most are services from Google:

Webmasters will enjoy access to the tools of Googles for webmaster, and Analytics with a single click! You can make yourself a bundle for your own favourite applications.