Chromeless : Web Applications on the Desktop

Creating desktop applications from Web technologies, mainly in HTML 5 is the goal of Chromeless.

In February 2011, the Mozilla Foundation announced it has abandoned the Prism project and replace it by Chromeless. Prism allowed to run Web applications on the local office, Chromeless goes further.

But all that is history. Prism is not abandoned too, and in 2017, the best way to build a desktop app is with Electron. See Visual Studio Code from Microsoft or Advanced Explorer on Scriptol.com. 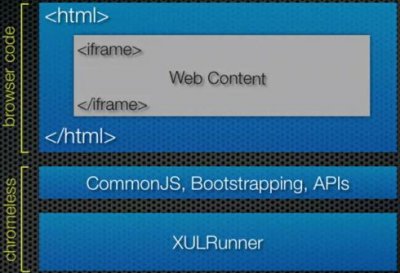 Chromeless name can have two meanings: it means "without chrome", which is the traditional system interface of Firefox, but it can also mean: alternative to Google Chrome browser.

Building his own browser

According to the team:

"We intend to create an experimental toolkit which will allow developers to build their own web browser using standard web technologies: HTML, CSS, and JavaScript. "

HTML now replaces XUL. It already shared many features, but with version 5 and the new tags, XUL has fewer benefits to offer.
Should we abandon XUL? The answer lies in a comparison of the two technologies: XUL vs. HTML 5.

Instead of a XUL file it is an HTML file which serves as a starting point and launches the application. In developing this HTML file, we create an interface for an application.

The JetPack system that builds extensions for Firefox 4 using HTML as the interface is included in Chromeless.
These extensions do not use XUL as the Firefox interface, but they interact directly with the same backend, in this case XULRunner.

We can totally abandon Firefox and build an interface as done with jetpack, and build a Web application!
Since XULRunner can run locally, this application will also run on the local desktop.

Why abandon Prism? The idea was to install Prism, a mini browser, on the desktop and link it to Web applications to make them work locally.
Chromeless seems to have a different purpose: to create a local application in HTML 5.
But since the application is built as a Web application, and runs on XULRunner as it does in Firefox, it can indifferently run on Firefox or locally.