XAML is the user interface language of Metro in Windows 8. This next to HTML 5 that uses web standards CSS and JavaScript.

In fact XAML is a language much more developed than HTML, offering amount of tags to represent the components of a graphical interface. Also it can be used with any programming language and not just with a unique scripting language.
In both cases, in Metro, the goal is the same, create immersive applications. These are applications where interface elements are invisible, nothing should distract the user from what is the topic of the application. If the application is an online magazine, for example, the user sees only the pages, which implies a touch interface for reading it, or something similar with the mouse.

With the Metro interface, Microsoft starts from scratch: all applications are to be created or converted from existing legacy applications. Metro will not be used as we use Windows because the software that we have run on this environment (which is not true for open source software as LibreOffice).

This return to zero leaves room for possible alternatives, not from Microsoft. One already exists, Plasma Active, a version of KDE for immersive applications based on the Qt framework. Plasma Active work on all Linux systems next to the classic GUI (as Metro coexists with the Desktop Classic), and demonstrations are given on mobile devices. 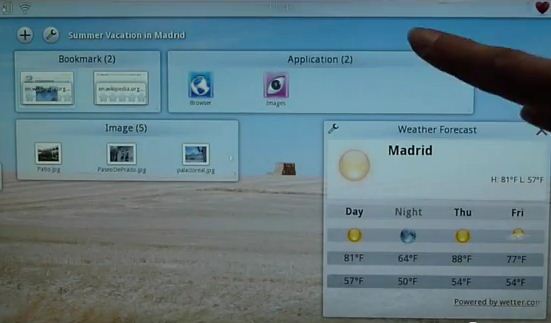 Can we imagine also XUL as an alternative to XAML for an interface such as Metro and immersive applications?

This would requires a RAD, a good development system. Eclipse can play this role, since it is already allowing to develop applications for Android and XUL classic apps.

Besides to Metro, Microsoft is developping under the code name Jupiter a new model of applications. In this model, an application is an XAML interface with a backend API giving direct access to functions of the system. This is the opposite of HTML 5 applications that are portable and have very limited access to the system. It is also a way to make applications highly developed and very fast on PC and mobile.

The philosophy of XUL is against this: it is mainly dedicated to be portable and not for Windows, so the backend can not directly access the system. Access to native code is done through XPCom which is anything but intuitive.
In fact all the features that should be provided for XUL immersive applications are in Plasma Active.
But the Mozilla browser for mobile, so touch-screen, and based on XUL shows that this language as well as XAML can adapt to immersive applications. However XULRunner, the runtime, is not WinRT and does not offer the same ease of access to computer resources.

In conclusion XUL lacks the backend available for XAML, a platform providing direct access to the system, whether on PC or mobile for building modern reactive applications.