To replace HTML 4, as the format of Web pages, the W3C, which sets the standards of the Web, has taken a specification started by the WHATWG.
This new format is implemented progressively by all browsers including Internet Explorer 9 is designed for Web applications and adds both new tags and new features. It is now a successor to Flash and Silverlight.

"Apple does not support Flash because it is so buggy. Whenever a Mac crashes more often than not it’s because of Flash. No one will be using Flash. The world is moving to HTML5."
(Apple Town Hall Meeting, January 2010). 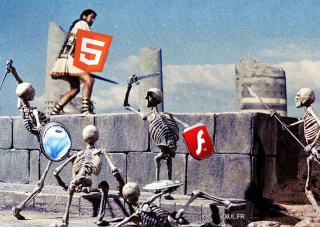 HTML 5 vs Flash and Silverlight

Using Web applications offline is the major trend since 2008. A framework, Google Gears, has been created for that, now replaced by equivalent functions in HTML.
In offline mode pages and objects they display are cached and a local SQL database (IndexedDB) stores the data to duplcate the remote base.

New graphical component has been added: see the list of form objects in HTML 5 and their current implementation in browsers.
The input tag can represent more types of objects and has new features like auto-complete. Output displays the result of calculations.
The addition of constraints on the data helps to secure the forms.

Section, article, header, footer tags are intended to give structure to a document.
Dialog is an object formalizing a discussion and is associated to a label element.
HTML has now canvas, audio, video tags and many other new elements.

Structure of an HTML 5 page
The tags required and new structure tags introduced with HTML 5.

Doctype
Which one to choose?

Div and span
Differences in practical use.

Radio button
How to know what checkbox is thicked for Ajax scripts.

Table
How to organize tabular data.

Tags to highlight a textual content
HTML has a series of tags to distinguish the essential or special in a text.

Comment
The HTML 5 tag, and conditional comments of Internet Explorer.

Canvas
This is a surface on which objects are displayed with JavaScript scripts.

SessionStorage
Description and check for compatibility.

HTML 5 is gradually supplemented by APIs (Application Programming Interfaces) that turn a browser into an application platform.

FileReader
Loading a text or an image in a page, from the local file system.

Fetch
Load asynchronously content in a page, as with Ajax, but in a simplified way.

WebSocket
Using the successor of Ajax that allows two-way communication between the server and the browser. Ajax is still useful for some classes of applications. This tutorial uses JavaScript and PHP server side.

Web Worker
There is an equivalent to Ajax for scripts running in the browser, not on the server.