Description of the Xul Dev Project

Xul Dev is an Integrated Development Environment designed to build software with an XML-based graphical user interface. The IDE should work with any programming language.
The project is currently in work and is released under the Mozilla 1.1 open source license.

The main window is a tabbed-panel that displays several files in source form. The left panel is also a tabbed panel to display either the directory structure or the hierarchy of objects of the current project.
The main tool bar has commands to load a project, compile a program etc...
The left panel has a local toolbar to manage the project or the files.
A widget bar will be added to the interface and a property panel also. 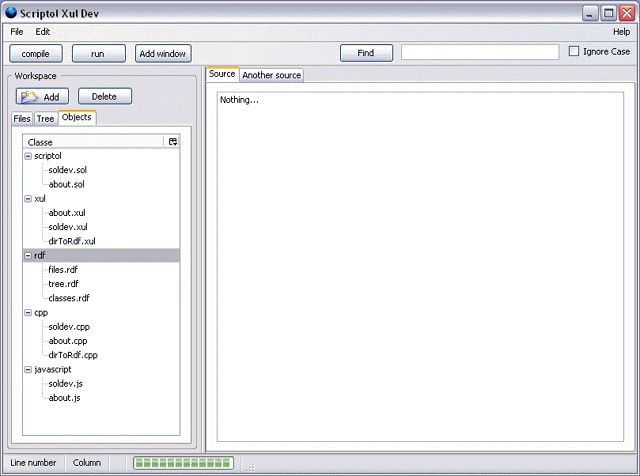 The components of the program are visible by the user only through the graphical components that interacts with them.
There are:
- The editor.
- A drag and drop form designer.
- The project manager.
- The property tool.
- The file selector.
- The help system.

The source is written in Scriptol that is a programming language that allows to embed XML and thus XUL as well.
The IDE is in work but some code is available: