JavaScript and C: Inheritance and differences

The syntax of the language is that of C but can differs to make a more dynamic code. It takes some features from the Awk and Perl languages. 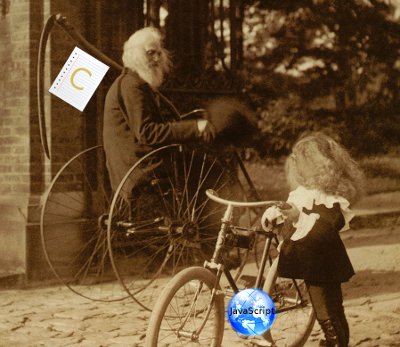 There are some notable difference between the two, because JavaScript is also inspired by other languages​​:

All these differences have the same goal: making the language most dynamic and facilitate the creation of scripts.

Highlights of the JavaScript syntax

Instructions and separators, the semi-colon case

The instructions are not constrained by the end of line (except a simple comment) and it uses for single separator the semicolon. But when a statement is considered complete and that the interpreter encounters a space, an end of the line, a tab, it virtually inserts a semicolon. It is better not be counting on that to not make the code unreadable.

The comma is an internal separator in instructions, for example in the header of a function it separates the arguments.

Parentheses () group lists or isolate an expression.
The squate brackets [] are used to index a table.

A simple comment begins with a double slashes // and continues until the end of line.

A closed comment begins with the couple of symbols /* and ends with */ without line endings have a role to play other than formatting.
It could fit on one line or holds several lines.

A set of instructions is isolated by these operators: "{" for the beginning of the block and "}" to the end. This set is usually associated with a command like if (condition), or a loop.
It can be used simply, it is not useful, but it is not a syntax error.

With the difference that the second case can groups a set of instructions.

The with clause was added to JavaScript

Its role is to define a subset which uses the methods and attributes of an object without the need to mention this object.

In this example, the method toUpperCase () of the String object is implicitly applied to the x instance thanks to with.

An example would be more useful with document in place, then we can make a simpler code using write or other methods as getElementById in series.

The code of these demonstrations is embedded in the page and therefore displays the word "hello".

The syntax specific to instructions of the language is described in the chapters dedicated to them.